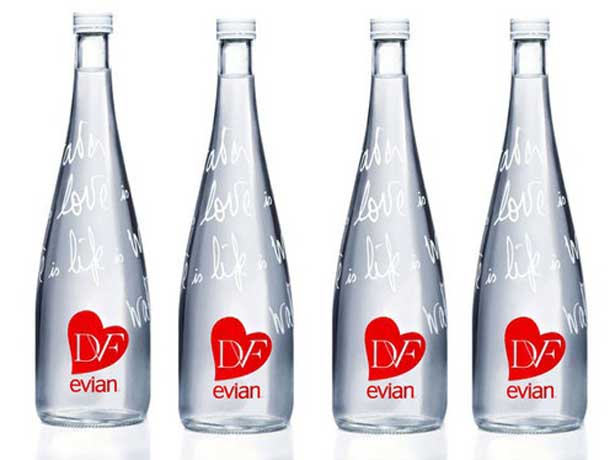 PARIS, France, (November 2012), — evian® Natural Mineral Water carries on its celebration of youth and purity with the release of the newest addition to its limited edition bottle collection by iconic American designer Diane von Furstenberg.

evian’s latest limited edition bottle by Diane von Furstenberg reflects a playful celebration of life and features a nod to the designer’s iconic mantras with, “Water is Life is Love is Life is Water is…,” gracing the bottle in her distinct handwriting. Von Furstenberg drew inspiration from her personal relationship with evian® water and her own love of life. The result is a unique design that combines evian’s commitment to purity with DVF’s youthful and optimistic philosophy.

“Diane von Furstenberg is a globally-recognized pioneer in the fashion industry through her eponymous DVF brand and has also established herself as an icon through her philanthropic ventures and mentorship as president of Council of Fashion Designers of America (CFDA). Her design for evian’s latest limited edition bottle symbolizes von Furstenberg’s youthful mindset and inspirational way of life, while perfectly embodying evian’s Live Young attitude and brand values,” said Martin Renaud, President of evian® Volvic® World.

Diane von Furstenberg is the first American and female designer to be appointed for this bottle design collaboration. evian’s limited edition bottle by Diane von Furstenberg is printed in organic ink and features the designer’s ubiquitous heart DVF logo in a special hue of red, created exclusively for the evian® collaboration. The bottle, composed of 100% recyclable packaging, is sealed with evian’s new screw cap design.

“I am so excited about this collaboration because I have always loved evian® and I think drinking water is one of the most important things we can do to love ourselves and love is life ! To me it is all about living life to the fullest and I am so proud to work with evian® to spread such an important message.“ said Diane Von Furstenberg.

Just in time for the 2012 holiday season, the DVF-designed bottle will be sold from November at TBC.

Since 2008, evian® has collaborated with the world’s most esteemed designers including Issey Miyake, Paul Smith, Jean Paul Gaultier, Christian Lacroix and Courrèges. To date, 10 million Limited Edition bottles have been sold and distributed to over 150 countries worldwide.

Bottled since 1826, evian® Natural Mineral Water is the world’s #1 brand of premium natural mineral water. Every drop of evian® takes more than 15 years to filter through mineral rich glacial sands in the pristine French Alps. Bottled at the source in a state of the art facility, evian® comes from the Cachat Spring located on the Southern shore of Lake Geneva, in the town of Evian-les-Bains. evian® provides a uniquely balanced mineral composition and subtle flavor as a product of its unhurried journey.

Today, evian® Natural Mineral Water is a brand of Danone, a global leader in the food industry and a leading producer of packaged water, dairy, infant nutrition and medical nutrition products. The mission of Danone is to bring health through food to as many people as possible. evian.com
fb.com/evian
twitter.com/evianwater

Sharing the epitome of celebration with the evian® Limited Editions

Since 1992 and the Olympic Games Limited Edition, evian® has settled a unique rendezvous with the brand consumers worldwide, offering them unique original creations for New Year celebrations. From bold and innovative designs to international fashion designer collaborations, each Limited Edition keeps the same spirit: reinventing a rare and festive moment, that is to say an optimistic vision of the world in a joyful and creative mood and moreover most of all the idea that ”Youth is not a matter of age, it is a mindset“.

Diane von Furstenberg first entered the fashion world in 1972 with a suitcase full of jersey dresses. Two years later, she invented the wrap dress, which came to symbolize power and independence for an entire generation of women. After a brief hiatus, Diane reemerged on the New York fashion scene in 1997 and re-launched the iconic dress, reestablishing her company as a global luxury lifestyle brand. DVF is now sold in over 70 countries worldwide, and has 54 freestanding shops.

In 2005, Diane received the Lifetime Achievement Award from the Council of Fashion Designers of America (CFDA), and one year later was elected to her current position as its President.

Diane’s commitment to empowering women is expressed through fashion, philanthropy and mentorship. She sits on the board of the non-profit Vital Voices, and in 2010 established The DVF Awards to support and honor exceptional women and organizations.
dvf.com